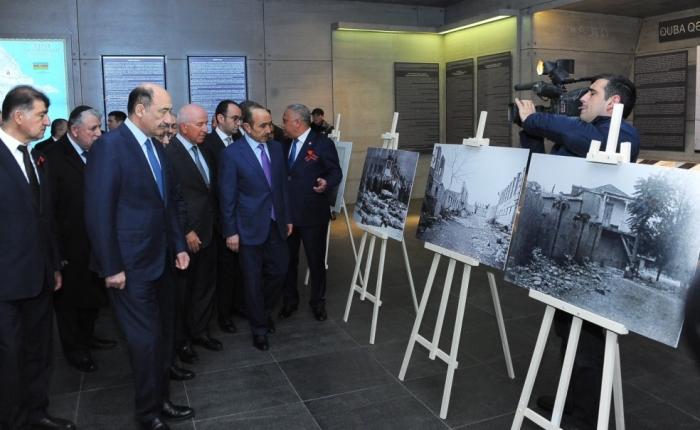 A republican science conference, dedicated to the 100th anniversary of the 1918 Genocide of Azerbaijanis has been held at the Guba Genocide Memorial Complex  (March 31, 2018).

Addressing the conference, Azerbaijani President’s Assistant for Public and Political Affairs Ali Hasanov said genocide crimes still occur in the world due to double standards and failure of leading countries to timely react to such crimes.

He noted that Azerbaijan joined the Convention on the Prevention and Punishment of the Crime of Genocide in 1996.

“This convention was adopted by the UN General Assembly on December 9, 1948. Although 70 years have passed since its adoption, genocide crimes still occur in many parts of the world. The main reasons are double standards prevailing in the world, failure of the international community, especially leading states to timely and adequately react to genocide crimes,” added Hasanov.

He stressed that the preservation of the burial discovered in Guba back in 2007 has always been in focus of attention of the head of state.

"Upon the instructions of the head of state, Head of the Presidential Administration Ramiz Mehdiyev signed the order "On Some Issues Related to the Guba Genocide Memorial Complex" on June 5, 2017. Under the order, a commission was set up to investigate the current situation in the complex and prevent the destruction processes. The commission revealed that acceleration of decomposition of human remains and activation of landslides complicates the preservation of the burial in its form.

Therefore, it was deemed advisable to bury human remains in accordance with traditions and customs, install a commemorative plaque, and, if necessary, create conditions for excavation in order to carry out further historical research. This was reported to the country's leadership. In accordance with the proposals of the commission, the victims of the genocide were buried, and a memorial plaque was installed over the burial," Hasanov said.

Ali Hasanov noted that the genocide of Azerbaijanis of 1918 really became the most difficult trial on the path to the creation of the Azerbaijan Democratic Republic (ADR).

However, despite the brutal extermination and heavy losses, the Azerbaijani people, having passed these trials, defended their lands, he added.

“The first independent republic in the East was created,” he said. “As you know, centenary of the ADR formation will be celebrated in two months. On May 16, 2017, Azerbaijani President Ilham Aliyev signed a special decree regarding the celebration of this anniversary in the republic at the state level.”

“Despite that our people were subjected to genocide by Armenian nationalists in various periods of history, survived mass extermination, deportation, ethnic cleansing and terror, these crimes didn’t receive political and legal assessment,” Ali Hasanov noted. “This happened because every time Armenians carried out their insidious intentions, relying on the support of their patrons, in other words, on the central government, on the holders of real power.”

“That’s what exactly happened in 1905-1907, 1918-1920, 1948-1953, and subsequent periods,” he added. “For the same reason, the facts of the genocide were either concealed or presented in a distorted form, and the research work was carried out under strict administrative and ideological control. There was no opportunity to save the tragic pages of the past in the memory of the next generations so that people wouldn’t remember this tragic lesson in their history.”

“In the end, in the late 80's - early 90's of the last century, the Armenian expansionist chauvinism emerged once again, the Azerbaijani people again were subjected to serious trials, deportations, ethnic cleansing, occupation and experienced such a terrible tragedy as the Khojaly genocide,” Ali Hasanov said.

“Only in the years of independence we got an opportunity to create a true picture of our past and give political and legal assessment of the genocide repeatedly committed against our people,” he said.

“From this point of view, the decree “The Genocide of Azerbaijanis”, signed by the national leader Heydar Aliyev on March 26, 1998, has an important historical significance. In this document, the tragedies accompanied by the seizure of Azerbaijani lands, mass pogroms, deportations and ethnic cleansing from the beginning of the 19th century until the present period were regarded as “separate stages of the policy of genocide deliberated and systematically implemented by Armenians against Azerbaijanis”, and March 31 was announced as “the Day of Genocide of Azerbaijanis”.”

Ali Hasanov reminded that on the initiative of the national leader Heydar Aliyev, the Khojaly genocide received political and legal assessment, and February 26 was declared “Khojaly Genocide Day.”

“Thanks to the work carried out as part of the international campaign “Justice for Khojaly”, launched in 2008 at the initiative of Vice President of the Heydar Aliyev Foundation, the facts related to the tragedy were brought to the attention of international community, millions of people in the world were informed,” said Ali Hasanov.

“On the other hand, in every country, just like in Azerbaijan, it is necessary to achieve that ethnic, cultural and confessional diversity would be accepted as a national heritage, human values, so that multiculturalism and tolerance would become a way of life of the society.”

He noted that today’s republican conference, alongside with exposing the actions of Armenian nationalists against humanity, is a contribution of Azerbaijan’s scientific community to the purposeful activity of the Azerbaijani state so that such cases would no longer occur and people’s safe living in peace and tranquility would be ensured.

“There is no doubt that interesting reports and speeches will be heard at the conference, new facts and valuable proposals will be voiced,” Ali Hasanov added.