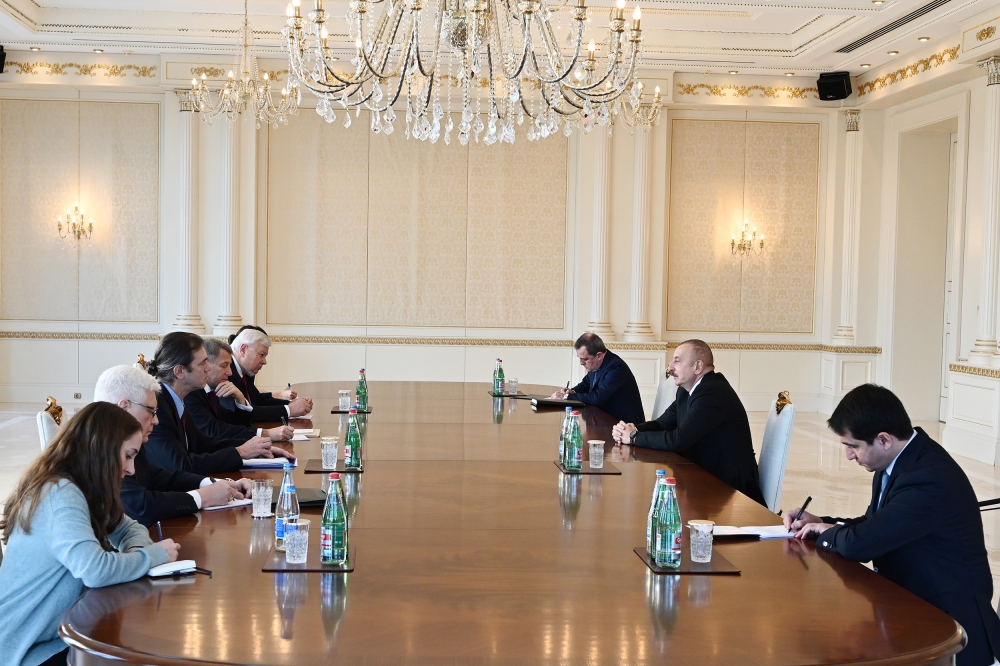 International community should deliver the direct messages to Armenia, first never ever in the future try to insult the feelings of Azerbaijani people.

President of the Republic of Azerbaijan Ilham Aliyev has received the OSCE Minsk Group co-chairs Stephane Visconti of France, Andrew Schofer of the US, Ambassador of Russia to Azerbaijan Mikhail Bocharnikov and Personal Representative of the OSCE Chairperson-in-Office Andrzej Kasprzyk.

Many politicians thought that the only way how to preserve peace is to keep status quo and we changed it. And we showed that the status quo can be changed by force, by courage, by wisdom, by policy, by concentration of efforts, by solidarity of Azerbaijani people, by the will of the Azerbaijani government and the spirit of Azerbaijani people and bravery of Azerbaijani soldier. We showed that we were right. And then, of course, Armenia was forced to sign the capitulation act. They would have never signed it voluntarily. We forced them, not Minsk Group, we, and President Putin. This is a reality. And if not for President Putin’s intervention and efforts, today probably the situation would be different. But we achieved what we planned. We returned all the seven occupied territories. We returned ancient Azerbaijani city of Shusha, we returned Hadrut district, we returned part of Khojavand, we returned Sugovushan, and others, and actually achieved what we planned. Now, when Russian peacekeepers are there and started the activity the situation is more or less stable. Though, I just got information yesterday about some terrorist acts either by Armenian Guerilla forces or by remainings of what they called Armenian army. This, of course, is of concern, I think the last thing which Armenia should do is to start again. Two days ago on the military parade, which was devoted to our glorious victory, I said that if Armenian fascism raises its head once again, we will smash it with the iron fist. So, the last thing for them is to plan some military actions. We will destroy them completely this time. It should not be a secret for anyone. But I hope that it will not happen. So, peacekeeping mission, is enforced. You know that peacekeeping operations were part of the agreement which was discussed, part of the Madrid principles, but we never seriously discussed it, Andrzej knows as a veteran. We even never touched on that. We had some general exchange of views what could be the composition of the peacekeepers, which countries it may represent, should they be neighbors, should they be co-chairs. There were different opinions. And I personally never elaborated on that. Because I said that it’s premature, we need to resolve the issue and then. And we never objected peacekeepers. We said yes, peacekeepers, they should come, and certain time protect the civilians, Armenians and Azerbaijanis. And it happens. And now, peacekeeping operations is done by Russia and it was supported by Armenia, and by Azerbaijan. At the same time, as you know, we are now already in the phase of creation of the monitoring center in Aghdam district of Azerbaijan. The center which also was reflected in the declaration, which we signed on the 10th of November. The Turkish-Russian monitoring center, will monitor the ceasefire regime. And this, I think, is also a very good sign of regional cooperation, also, a good sign of cooperation between Turkey and Russia. And this already is a reality. The last point, which I also want to raise and I am sure you heard about that is our views for the future, for the future of the region I mean. I already a couple of times publicly addressed this issue that the region must have new dynamics and there should be new developments in the region. Azerbaijan is ready, Azerbaijan as a powerful from economic point of view, from military point of view country, as a country with very broad international support, the country which today is chairing the second after the United Nations international institutions, the Non-Aligned Movement, is of course will do its part of the job in order to provide long-lasting stability and security. But of course, it also will depend on Pashinyan regime or if this regime is overthrown on those who will come after. And I think, international community should deliver the direct messages to Armenia, first never ever in the future try to insult the feelings of Azerbaijani people. You will be severely punished. We are patient. We were preparing, we did everything properly, we did not respond to the first Armenian provocation in July the way how we could. We didn’t cross the state border, though we could. We didn’t seriously respond to the second Armenian provocation in August when they sent the sabotage group to kill our people. But we responded to the third one in September and responded in a way that we destroyed Armenian army and almost destroyed Armenian state and put an end to criminal regime, on our territory, put an end to dreams of Armenian nationalists about the so-called "Artsakh", it does not exist. Pashinyan said 'Karabakh is Armenia.' It was wrong and he deserved what he got. He deserved this humiliation. Our people, our country deserved victory. Because the truth, and international law was on our side. I will probably conclude now in order to listen to you. Because it was your idea to come. I can tell you again in front of the cameras, I did not invite Minsk group to come. But when I was informed that Minsk Group wants to come, I said okay, I don’t mind, maybe they have something to tell me. If you want to do it in front of the cameras, it’s okay, if not, I can tell them to leave. It’s up to you. Yes, I am listening to you.

-Mr. President, I listened to you carefully. First of all, this is a very special day today, the 12th of December. so, the rememberance day. I had the chance to meet with your father when I was in Paris with president Chirac and the part of the negotiation at that time. We understand it, as you mentioned yourself, the co-chair countries have been over the last 28 years trying to fulfil them and that’s difficult in the term of the mandate, to facilitate the solution between the sides. I appreciate the fact that you mentioned creative proposals we have been working on that, and of course, trying to find a solution corresponding to the willingness of the partners just as mediators. My government has been welcoming the ceasefire and the end of the bloodshed. We have a very positive view on the all the provisions of the agreement, signed in the night of the 9th and the 10th. We are ready to pursue the new agenda of the evolution totally different situation that you mentioned yourself to stabilize the region, to bring prosperity, in an impartial, and collective way, but it is up to you whether you want the Minsk Group to further work on all the pending issues. Yes, we do have a good basis, we are in the transition period and the future is not written. I will, of course, report to my government all the considerations that you have publicly developed now. Of course, our presence in Baku, as far as I understand, was due to invitation. We would not have come without invitation, so there is probably a misunderstanding in the context of this mission. But again, I want to thank you for receiving us, hosting this meeting and presenting for my government and my president all this views that I will very faithfully transmit. Thank you.

OSCE Minsk Group co-chair of the US Andrew Schofer said:

-I also like to extend my thanks for your decision to receive us here today, and your hospitable welcome. Thank you also for your very clear playing out of your position. As my colleague said, we are also going to report that back to our governments. Although I think much if not all that you said you have also said publicly. We understand your thoughts on the new situation we have. We all acknowledge and recognize you are dealing with the new reality and I think the main reason we wanted to talk to you was to get a better sense from you, and you have laid some of this and perhaps we have a more detailed discussion of how you see things going from here. The situation on the ground now, is different. I don’t know if this is how you see the future at large, and I mean by that specifically the Madrid principles talk about opening lines of communication, re-establishing relations, providing a positive environment for a future of all the people in the region. If that is a part of your vision, I think, there is perhaps a role that we, our countries can play in helping to fulfil that. We want to understand from you how you would like to proceed. As you know, we will be going to Erevan after this and we will have a similar conversation on that side. And perhaps we will have a more detailed discussion outside of the conflict zone.

-If I may, Mr. President, thank you very much for the opportunity to meet with you within the Minsk Group co-chairs. Russia as we know played a part in tripartite declaration that was made and attach a lot of importance to the implementation of the provisions of that declaration. I think there are still things to be done to fully implement this document that concerns, as you said Mr. President, return of the people of displaced persons to the areas, peaceful reconstruction of the regions and, of course, what you outlined the future of the peaceful and successful developments of the region in the conditions of peace. As for the Minsk Group, our government has always stressed the importance of this Group, and that’s why we participated and are still participating in the Group. I think the joint position of the Group was expressed quite recently in the statement on the 3rd of December by the heads of the delegations of all the three countries' co-chairs of the Minsk Group. The joint attitude is reflected there and we will be very glad to assist while we can in implementing those aims of reconstruction which you Mr. President has laid down today. Thank you. 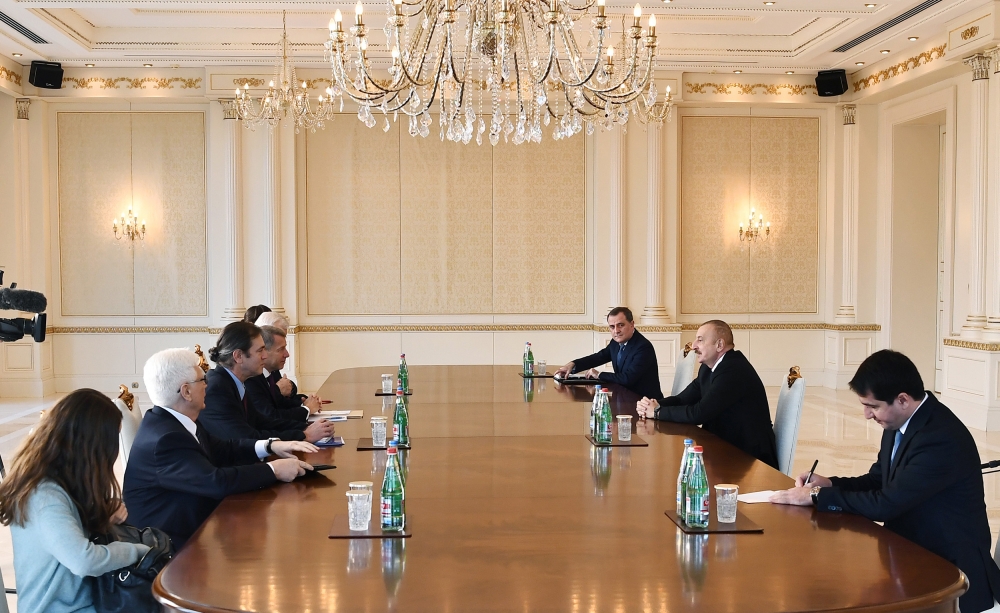