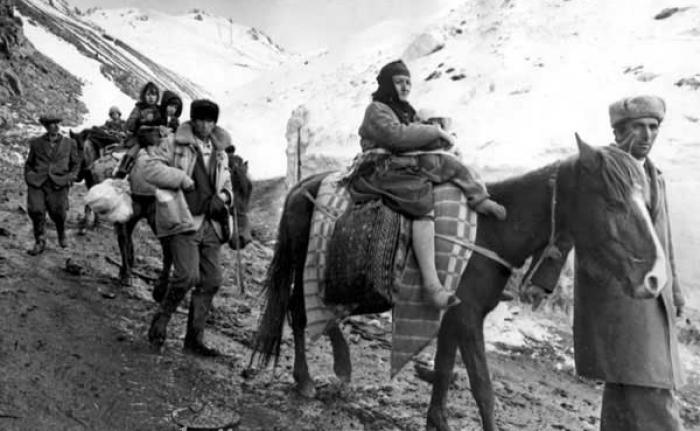 They began with the occupation of Azeri settlements in Daghlig Garabagh. The Kerkidjahan village was occupied on January 15, 1992, Malybeyli, Gushchular on February 10, the defenseless inhabitants were killed and injured, while the ring surrounding Khodjaly and Shusha was tightened. Hurriedly, the assembled troops of Azeri volunteers hold an unsuccessful ballet at Dashalty. The united Armenian and Soviet troops occupied the Garadaghly village in mid-April. The most tragic fact in the whole modern history occurred on the 26th February night, 1992 when Armenian troops committed a horrible genocide against Azerbaijanis in Hodjaly village.

That was the most terrible mass genocide committed by Armenian separatists and Armenian military troops. It can be compared with the fascist bloodsheds during the World War II. The leadership of Azerbaijan which at that time was supporting Moscow instead of defending its own people in the war against the territorial integrity of Azerbaijan, was losing its power. As the national liberation movement was gaining its strength, Ayaz Mutalibov's government resigned and this further weakened the defensive capacity of the Republic of Azerbaijan.

As a result Armenian troops occupied Shusha in May 1992, thus invading almost the entire territory of the Daghlig Garabagh. The next step was the occupation of Lachyn, which served as a corridor between Daghlig Garabagh and Armenia. Armenians made use of political instability in Baku and occupied Lachyn as well. The fights for power under the Popular Front regime from May 1992 to June 1993, significantly weakened the defensive capacity of Azerbaijan. In 1993 Armenians captured Kelbedjar. Azerbaijan experienced a deep political crisis in June and in these conditions by demand of the population Heydar Aliyev came to power. Armenia continuing its war with Azerbaijan invaded Aghdam, Fuzuli, Djebrayil and Zengilan between July and October of 1993.

Armenians devastated the occupied lands. 20 thousand Azerbaijanis fell victims of the war, 100 thousand people were wounded, 50 thousand people became invalids. The number of refugees and IDPs exceeds 1 million. According to official sources, 4,852 Azerbaijanis, including 323 women, 54 children and 410 elderly persons were taken hostages. Armenians concealed the real number of hostages from international humanitarian organizations, treated them violently and cruelly, made them work, humiliated and insulted them.

UNO confirmed the fact of occupation of Azeri lands by Armenians and conduction and unfair war against Azerbaijan and its territorial integrity. The UN Security Council ratified four resolutions (No 822, 853, 874, 884) on the Armenia's withdrawal from Azeri lands. Yet Armenians did not follow the resolutions.

Azerbaijan was in need of mobilizing its military-economic and human power in the war against Armenian invaders. For this purpose Heydar Aliyev appealed to the population on radio and TV channels November 2 and serious measures were undertaken. That enabled to radically change in Azerbaijani people's struggle against Armenian separatism. The attacks of Armenian troops in direction to Beylagan were rebutted in mid November. As a result of successful operations of Azerbaijan army the strategically important Horadiz district and 22 villages of Fuzuli were released from enemy on January 5, 1994.

After that Azeri troops released part of Djebrayil district, Bozlu, Tekeqaya, Babashlar, Qanlykend, Chepli, Qasymbinesi, Yanshaqbine, Yanshaq, Baghirsaq, Qamyshly settlements. Chichekli mountain and other strategic peaks were returned, Kelbadjar-Lachyn road's section till the tunnel was taken under control. The enemy lost 4 thousand soldiers and militants, 50 armored techniques and 15 artilleries, etc. The achievements of Azerbaijan in making turn in the war and releasing its occupied lands excited nor only in Armenia but also its supporter-countries.

The policy of Armenia's protectors for reinforcement of its military potential, providing it with up-date guns and for turning it to the reactionary force in the region, significantly strengthened. In these conditions Azerbaijan signed the Bishkek protocol on May 8, 1994.

Due to Azerbaijan's progress in fighting its enemy the ceasefire was reached on May 12.

During the occupation war against Azerbaijan Armenia moving forward to 360 kilometers from the border captured 20% of Azeri lands, and took control over the areas from Horadiz district of Fuzuli till Zengilan and 198 kilometers border between Azerbaijan and Iran. As a result of invasions 2 cities, 1 district and 53 villages of Karabakh with the population of nearly 50 thousand people were captured. Beside Karabakh the military invasions resulted in occupation of 890 towns, villages and districts. The destructed establishments, occupied sawn areas and woodlands were as follows: residential buildings-150000, public establishments-7000, secondary schools-693, medical institutions-695, motor ways-800 km, bridges-160, water pipeline-2300 km, electric lines-150000 km, woodlands-280000 hectares, sawn areas-200000 hectares, historical museums and monuments-464. The damage caused to the Azerbaijan was initially estimated to USD 60 billion. Moreover, the occupied lands account for all reserves of mercury, obsidian and pearlite, 35% of building and facing materials, 23.8% of forests, 7.8% of water reserves and other riches. Besides, 2 reserves, 3 game reserves and 3 large water reservoirs locate in these lands.