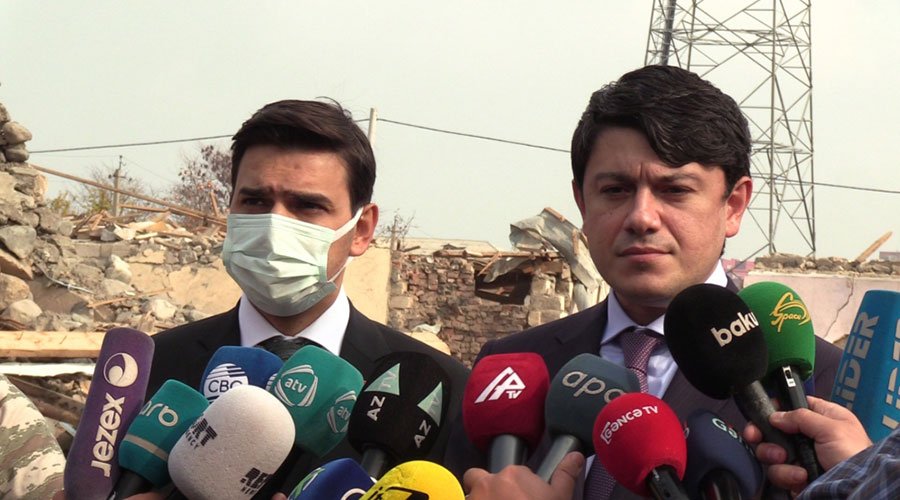 Chairman of the State Committee on Work with Diaspora Fuad Muradov met with Abdullah Eren, head of the Presidency of Turks Abroad and Related Communities, who is on a visit to Baku.

The chairman of the committee said that the meetings of state and government officials of Turkey from September 27 to date, the statements made about Azerbaijan, the solidarity of the brotherly country with our people and the national-moral support are irreplaceable support.

Fuad Muradov once again conveyed the words "Turkey has stood by us since the first days and hours of the war. Turkey has always stood by Azerbaijan, Azerbaijan is not alone. This political and moral support continues today" by the President of the Republic of Azerbaijan Ilham Aliyev as well as the statement of the President of Turkey Rejep Tayyip Erdoghan “My brother, President Ilham Aliyev, said "Karabakh is Azerbaijan." I want to repeat the same idea" to the participants of the meeting.

Speaking about the fact that the whole world has once again witnessed the Azerbaijan-Turkey brotherhood and historical friendship in these crucial historical days, the chairman of the Committee noted: "Today, the Armenian propaganda machine is conducting an ugly propaganda campaign not only against our country, but against the entire Turkic world. Azerbaijani communities and diaspora organizations abroad demonstrate determination to prevent the ideological provocations of the aggressive Armenian circles. Our soldiers give a worthy response to the Armenians on the battlefield, and our diasporas in the international information space.

I would like to emphasize that in recent years, serious measures have been taken to organize our diaspora, Azerbaijani houses are already operating in 12 countries, and Coordination Councils have been established. But we have a lot of work to do. We must resolutely mobilize our resources so that the Turkey and Azerbaijan diasporas can continue to work together and access international media platforms.”

Abdullah Eren said: “The Turkish people have always supported Azerbaijan in its just struggle and this support will continue. We are closely following all the processes, the just struggle of Azerbaijan. We will use all opportunities to inform the international community about the terrorist acts committed by Armenia, which has occupied Azerbaijani lands for 30 years, ignoring UN resolutions and international law, and to strengthen cooperation between our diasporas.

Azerbaijanis living in Oslo protested in front of the Parliament building

Azerbaijani House has been given to use in Barcelona

The liberation of Shusha was also celebrated in Rotterdam

Australian public was informed about vandalism acts of Armenia in Ganja