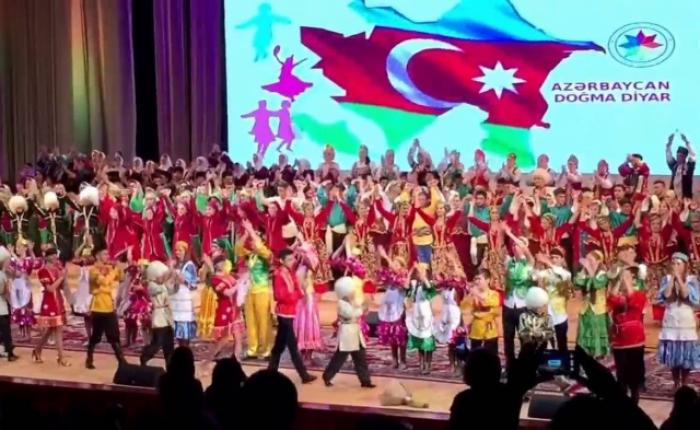 Azerbaijan, located at the crossroads of various civilizations throughout many centuries has become famous as a country where was formed the atmosphere of national cultural diversity, where representatives of various nationalities and faiths live in the atmosphere of peace and welfare, mutual understanding and dialogue. The multiculturalism and tolerance historically inherent in the life of Azerbaijanis today became an integral feature of everyday life of each citizen of the Azerbaijani state, irrespective of national identity, language and religion. Not only today’s tolerant manner of life of our people, but also the literary and art, scientific and philosophical, political and legal sources and documents created by this people are the evidence to the rich multicultural past of the Azerbaijani people.

The literal translation of the English word “multiculturalism” means “many cultures”.

Multiculturalism aims at preservation, development and harmonization of cultural diversity of the representatives of various religions and nationalities in separately taken country and in the entire world in general, on integration of the small peoples into national culture of the states.

Under the model of multiculturalism it is understood peaceful co-existence within borders of one state of various ethno-cultural communities having the right to officially express, protect and preserve the cultural features and lifestyle. Multiculturalism represents the necessary instrument for the dialogue of cultures and civilizations.

Development of multiculturalism, tolerance and religious tolerance at the level of state policy in Azerbaijan is based on ancient history of statehood of the country and on development of these traditions. If to look at historical traditions, we will see that still in the period of the Sefevids’ state and during the era of enlightenment of the XIX-XX centuries, and in the period of the Democratic Republic in the territory of Azerbaijan, along with Azerbaijanis, also lived the representatives of other ethnic and religious groups. At the end of the XX century, thanks to efforts of the national leader Heydar Aliyev, this political behavior has acquired a form of ideology of statehood, and restored were the traditions of tolerance and multiculturalism. Political bases of the Azerbaijani multiculturalism have found its reflection in relevant clauses of articles of the Constitution of the Republic of Azerbaijan, legal acts, decrees and orders.

Azerbaijan is a country of rich cultural and spiritual heritage and traditions of tolerance. Today, this truth is recognized on the international arena.

Thanks to the national cultural diversity existing in Azerbaijan, the atmosphere of ethnic and religious tolerance, our Motherland is known as the multinational and multi-religious country, a space of global intercultural dialogue. Today, the state policy which is successfully pursued in the Republic of Azerbaijan aimed at preserving this cultural, linguistic and ethnic diversity necessitates an environment of special care and enrichment of the historical experience in the sphere of multiculturalism, strengthening of promotion of the unique success achieved in the Azerbaijani society in this direction which is saved up for centuries on the international arena.

The political line pursued under Heydar Aliyev’s leadership in the sphere of preserving multicultural traditions of the Azerbaijani people is surely continued and developed by President Ilham Aliyev. The national leader of our people Heydar Aliyev has said: “Every person’s nationality is his/her source of pride. I have always been proud and I am proud today that I am Azerbaijani!” Today these catchwords became a life formula for each worthy citizen of the country.

On the order of the President of the Republic of Azerbaijan of January 11, 2016, this year was declared the “Year of Multiculturalism”.

One of the major factors stipulating formation in our country of intercultural dialogue is the fact that the space where Azerbaijan is located, geographically is on the junction of the East and West.

Today, Azerbaijan, playing a bridge role between the two different civilizations, raises its authority both in the Eastern and Western hemispheres. This idea is also enough reflected in the foreign policy of our state. Today, Azerbaijan is a full member of such authoritative organizations as the UN, OSCE, the Council of Europe, the Organization of Islamic Cooperation, and GUAM. Azerbaijan successfully continues process of integration into Europe within the Eastern Partnership project implemented by the European Union.

The atmosphere of tolerance is always at the highest level in Azerbaijan. That is why many events of the international level, scientific conferences devoted to the questions of multiculturalism, international and inter-religion relations and dialogue are held here. In April 2010 Baku hosted a summit of religious leaders entitled “Globalization, Religion, Traditional Values” in which took part more than 200 delegates from various countries of the world representing traditional world religions. This fact also demonstrates recognition by the international authority of Azerbaijan, expansion and development of the atmosphere of tolerance. Since 2011, on personal initiative of the President of the Republic of Azerbaijan Ilham Aliyev, once in two years Baku hosts the World Forum on intercultural dialogue. Similar forums are held in partnership with the UNESCO, the UN Alliance of Civilizations, the Council of Europe, the North-South Center of the Council of Europe, ISESCO, and the UN World Tourist Organization (UNWTO).

On September 8, 2015, a village called “Azerbaijan in the Heart of Paris” has operated on famous Palais Royal Square before the Louvre Museum where with the Foundation’s organizational support was held a conference titled “Religious tolerance: culture of coexistence in Azerbaijan”, a concert under the motto “The Azerbaijani Music in the Heart of Paris”.

Holding the 7th Global Forum of the United Nations Alliance of Civilizations in Azerbaijan is an indicator of the existence of multicultural and tolerant environment in our country. Establishment of this form of multiculturalism and its broad application is one of contributions of Azerbaijan to the world community.

Unlike the isolationism, assimilation and apartheid, multiculturalism means that in society, along with one dominating ethnic group, there is also a cultural diversity of other ethnic minorities and immigrants. At the same time, in the world there are a number of states pursuing the aim on various pretexts to provide superiority of their cultures. Activities of such states both in the historical past and at present, directed to assimilation of other ethnos and immigrants, to their physical or moral annihilation, today turn into tradition of a state policy.

Now, there are a number of various models of multiculturalism – model of the USA, Sweden, Australia, Canada. But the multiculturalism model which is presented to the world by Azerbaijan is approved and takes root as model for many progressive states of the world. This model is steadier as it has historical roots. Evident confirmation to that is acceptance by the senates and Houses of Representatives of the Utah and Oregon States (USA) of the declarations approving the Azerbaijani model of tolerance.

Today, multiculturalism does not have alternative. We have the right to be proud of the fact that from the point of view of cultural values, our country holds a leading position in this sphere and is perceived by people of the world as an irreplaceable example.

The multiculturalism which has turned into a state policy appears as an invariable lifestyle in modern Azerbaijani society.

Today, a new positive tradition is observed: the tolerant and multicultural reality existing in Azerbaijan is represented to the world not only by Azerbaijanis, but also by the foreign scientists, eminent figures of science, representatives of policy, and students. For this purpose, the service of the State Counselor on Multiculturalism, Inter-ethnic and Religious Affairs of the Republic of Azerbaijan has organized 4 virtual round-tables. Materials of these round-tables devoted to the subjects: “Socio-Economic and Spiritual Development in Harmony in Present-day Azerbaijan”, “Multicultural Security”, “Teaching the subject “Azerbaijani Multiculturalism" at universities of foreign countries: problems and prospects”, “Interest in Azerbaijan turns into love to Azerbaijan (The Azerbaijani multiculturalism in the eyes of local and foreign students)”, were published in the Azerbaijani, Russian and English languages and distributed within the country and abroad.

The famous scientists, public figures and students from Brazil, the USA, Italy, Lithuania, Bulgaria, Turkey, Russia, Georgia, Egypt, Jordan and other countries took part in the virtual round tables.

The winter and summer schools project of the Baku International Multiculturalism Center is implemented with the organizational support of “Knowledge Foundation” under the President of the Azerbaijan Republic. Within the “Teaching the subject “Azerbaijani Multiculturalism” at universities of foreign countries: problems and prospects” project,

The purpose of winter and summer schools consists in creation of conditions in order that the youth became the eyewitness how in our country are protected the multicultural and tolerant values which they acquired theoretically earlier.

On November 26, 2015, Baku hosted the XII session of the General Conference of the Islamic Educational, Scientific and Cultural Organization (ISESCO). Addressing the session, President Ilham Aliyev said: “We are absolutely sure that multiculturalism has a bright future. Just some politicians, public figures should be more attentive in their statements as there is no alternative to multiculturalism. The alternative is discrimination, Islamophobia, xenophobia. This way won’t lead to the future. Therefore, through our policy and initiatives we aspire and we will seek for strengthening of the interreligious relations in the region.”

In our country, multiculturalism has already turned into a lifestyle which doesn’t have alternative. The policy of multiculturalism which is carried out now in Azerbaijan is a bright example of commitment of our state to the principles of tolerance.