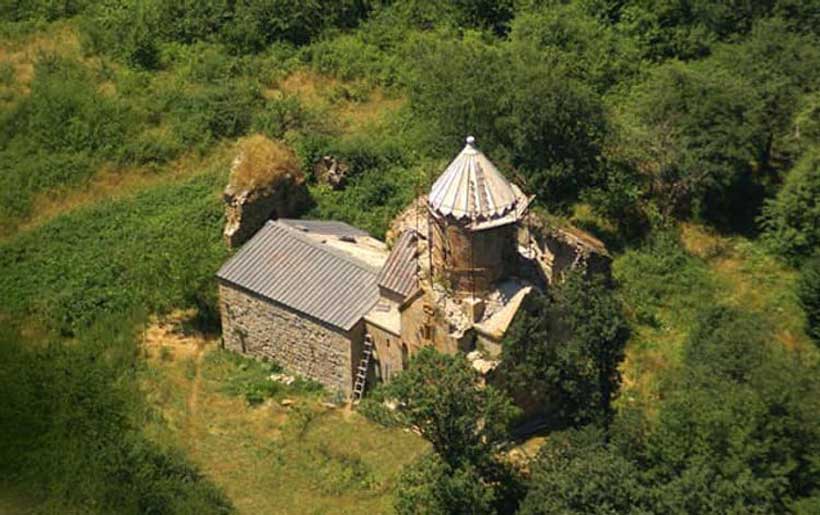 In contrast to Armenia’s attempt to “Armenianise” the Azerbaijani territory that it occupies, Azerbaijan it has restored the Armenian church in Baku...

Nagorno-Karabakh has been in the news for the renewed hostilities between Armenia and Azerbaijan. This enclave in the Caucasus has a distinctive culture, with a rich heritage in music, poetry and architecture. It is internationally recognised as part of Azerbaijan, but the territory has been occupied by Armenia for the past 30 years, along with seven adjoining provinces of Azerbaijan.

Concerns have been raised that Nagorno-Karabakh’s heritage has been systematically destroyed under Armenia’s occupation, as part of its attempt to strengthen its control by wiping out traces of the existing culture.

In Zangilan, for instance, when the district was retaken by Azerbaijan on October 20th, they could not recognise it after 30 years of Armenian occupation. The historical mosque of Zangilan had been turned into a swine shelter and the 13th century Gtich church, belonging to the ancient Christian state of Caucasian Albania, was found vandalised and smeared with graffiti.

The destruction of cultural and religious monuments in the occupied territory is regarded as a war crime under international law. The Hague Convention of 1954 obliges occupying forces not only to respect and preserve cultural property, but to prevent the theft of property in the event of armed conflict.

With Armenia occupying 20% of Azerbaijan, the onus is on Armenia to protect the cultural heritage of this region, particularly Nagorno-Karabakh. But after nearly one million Azerbaijanis were forced to flee their homes during the conflict in the 1990s, Armenia has systematically removed traces of Azerbaijani culture from the land they left behind.

George Mitchell, a British travel writer who visited the occupied territories in November 2014, found Aghdam “a ghost town” and the “Hiroshima of the Caucasus”, and reported on the devastation he witnessed.

Azerbaijan has called for a comprehensive international fact-finding mission for the preservation of cultural heritage in the occupied territories. But Armenia has declined to allow this mission to carry out its work.

In 2001, the Council of Europe listed “500 historical architectural and more than 100 archaeological monuments, 22 museums, 4 art galleries, 927 libraries, 85 musical schools, 4 state theatres” in the Azerbaijani territory occupied by Armenia, and raised serious concerns about their destruction by Armenian forces.

The report called for the protection of several castles, cloisters, temples, tombs, caravanserais, mosques and bridges, which are all part of the world’s cultural heritage, including Sardar and Naji Novurazili Bey Mosques, as well as the Amir Saad Tomb in Yerevan, Armenia’s capital.

A more recent report of 2019 used satellite imagery to highlight Armenia’s “purposeful destruction and looting of the cultural heritage in the occupied territories” with the aim of “removing any signs of their Azerbaijani cultural and historical roots”. The images revealed the ruins of the Juma Mosque in Aghdam and Saatly, and the Mardinly and Ashaghy Govhar Agha mosques in Shusha.

The cultural city of Shusha was an important centre of Azerbaijani poetry and traditional mugham music, which was added to the UNESCO’s Intangible Cultural Heritage List in 2008. Thanks to its centuries-old mugham school, also known as one of the first conservatories of the Caucasus, Shusha was home to famous Azerbaijani mugham masters, suchas Haji Husi, Abdulbagi Zulalov and Jabbar Garyagdi. Uzeyir Hajibeyov, who wrote the national anthem of Azerbaijan as well as countless opera plays, including the first Azerbaijani mugham opera ‘Layla and Majnun’, also came from Shusha.

In contrast to Armenia’s attempt to “Armenianise” the Azerbaijani territory that it occupies, Azerbaijan is seen as a secular and multicultural state. It has restored dozens of churches, including Caucasian Albanian churches and the Armenian church in Baku, and numerous synagogues within Azerbaijan, while also providing support for the restoration of churches in France, the Vatican, and elsewhere.

This template is the need of the hour to preserve the cultural heritage of the Caucasus. The International Council of Museums has strongly condemned the targeting of cultural heritage as a weapon of war in Nagorno-Karabakh.

Armenia should therefore stop the cultural destruction in Nagorno-Karabakh and its surrounding districts, in line with international law. Otherwise, the damage already inflicted on the different religions and cultures in the occupied territories would soon be irreversible.

Shusha is free now! We have returned to Shusha!